A small finish (or two) and some news!

I said that I was hopeful for a more successful Q2 than Q1 in the FAL and since I'm posting about my first finish less (only just) than a month after my goal setting post I'd say that we're going in the right direction ;0)

Of course my first finish is the one which had the least amount of work required to compete it...

You know how I love to add names to things? I had some time to waste during a recent hospital appointment so added a little stitchery and when I got home it took next to no time to turn it into this....


I followed Noodlehead's great tutorial and it couldn't have been easier. I actually found it easier than a normal zippy pouch and the fact that it opens wide makes it so much more useful.


I used Annela Hoey fabrics throughout (well, apart from the lining which is an unnamed solid I found in my stash) and love the finished article, and more importantly, Anwen does too!

Again, this one was made with QAYG panels of Aneela Hoey fabrics and the embroidery was stitched during the same hospital appointment. 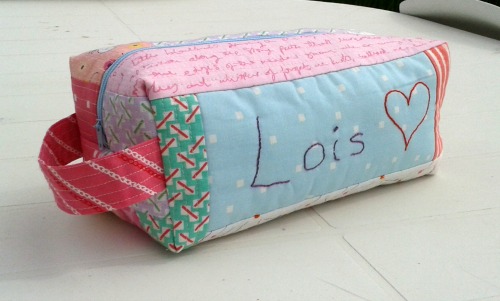 This one was a little trickier to sew up than the open wide pouch but gives you a very useful little (or actually not so little) pouch. There are two size options given in the tutorial and I followed the measurements for the smallest and was quite surprised by how large it ended up being - there's room in there for one or two pencils ;0)

Nearly forgot to add that both these pouches were sewed up using Aurifil in a beautiful baby pink colour. I really love Aurifil - I was sewing through quite few layers in a few places and didn't have a single thread break on me!

So lets hope that this isn't my last finish of the quarter, linking up (eventually) to Katy and the rest on the finishers!

Oh wait! I promised you some news didn't I?
You know that hospital appointment I did all that sewing during? Well, who'd have thought it but apparently 24 hour nausea and utter exhaustion are common side effects from incubating one of these!
Posted by Catrin Lewis at 14:08