So do you remember this post where I hoped that listing all of my WIP would shame me into getting some sewing done?

Cuddling a sickly baby on the sofa and washing, washing, washing. We saw the on call doctor on Sunday and she says that it's gastroenteritis (insert very unhappy face here). There was one point on Saturday that I thought that I was going to run out of clothes for both me and Marged as the washing machine just wasn't fast enough to keep up with the level of vomit (Sorry if tmi!)

My lovely mum came and helped yesterday and did some (ok, a lot) of ironing for me whilst I sat and watched from the sofa (the plan was that I would iron and Mamgu* to do the cuddling but only I would do).

So today she's a little better and is willing to take her naps in the cot but is still only drinking half her feeds and is hardly eating at all. (I think that I must have been very lucky with Anwen as her bugs only ever lasted 24 hours and she is hardly ever poorly (touch wood) so I'm not used to this!)

I'd also hoped that she would spend two days this week with the child-minder as settling in days. I was really looking forward to these days - two whole days of sewing! But when we got home from our holidays one of our neighbours said that she had been in hospital all week. My first thought was of course concern - our child-minder is a neighbour and family friend first, child-minder second. We knew her for a few years before she started looking after Anwen. Her family were guests at our wedding and we attended her son's wedding a year later. After my initial concern I must admit to thinking 'my sewing days' but then that was before the vomit started and it would have been a no go anyway. I'm hoping to call over to see her but will have to wait until Marged is 100% first as the last thing she needs now is to catch Marged's bug as well!

Any way that's the end of the excuses! I should really be sewing now as Marged's having a nap but......my minds on other things. All sewing related of course.

Katy's going to be hosting an impromptu-quilt-along complete with flickr group. 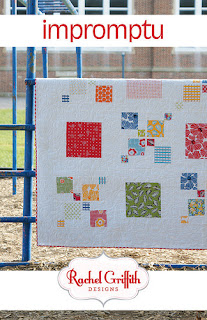 I am sorely tempted. Remember I won this? Well since I won it on Katy's blog it would be rude of me not to use it to quilt along with her right? Only thing is the pattern calls for a layer cake or 42 x 10" charms. I reckon that I would get 24 charms from the micro mod fq's but that leaves me needing and extra 18. I think that it would look nice with 18 charms in coordinating solids and the lovely Annie from The Village Haberdashery has suggested some beautiful Kona colours

But I'm supposed to be living on a budget and as well as the coordinating solids I would need 6.5yards of backing fabric without mentioning the quilt back, waddling and binding!

I think that I've decided to mull it over for a little longer. I will most probably join in the quilt along but might be a little late getting to the party!

But looking at these lovely fabrics on the interweb thingy has awoken the fabric buying monster inside me and he wont go back to sleep until I've bought something! Remember the house quilt I mentioned a while back? I was thinking of buying some Architextures Blueprint in Blue for the backing but whilst looking for a British website that had some in stock (I found one - click on the link above) I stumbled across some Summersville Town in Seaform on sale at Backstitch. Thinking about it the Blueprint was great because it referenced my bosses job (the quilt is for his son) and I thought that this was quite funny (I have a strange sense of humour) but the little houses and cars in the Summersville print seem a lot more appropriate for a baby quilt don't you think?

Because I'm not following a pattern for the quilt top I don't really know how big it's going to be so I've decided that I'm going to make the quilt top today so that I can order the backing tomorrow! So please check back tomorrow in the hope that I have a new WIP pic to show you.

Wow that was another really long post! I'm off now to blow the cobwebs off my sewing machine!

*Mamgu - Grandma in Welsh. (It always feels really odd calling her Mum or Gran when I'm speaking (or writing) English coz them ain't her names!)